I was very fortunate to be able to attend the Saskatoon Symphony Orchestra (SSO) concert last night. Much of the music is still with me today even though I have 3 very different rehearsals coming up later today.

Last night’s concert was one of a kind – long anticipated and fully Canadian. SSO Executive Director, Mark Turner told me after the concert that he thought this up several years ago and was pleased that the program fit together perfectly – like pieces of a puzzle. The programming was all Works by Canadian composers and included a Canadian Swearing in Ceremony. And, 3 of the 4 Canadian Works were World Premieres!

I noticed that the house lights stayed partially up for this concert – an interesting experience where instead of the darkness of the concert hall vs the brightness of the stage, we were all lit up to a certain degree – it felt in a way like we were even more part of the programming going on onstage.

Before the concert began, 2 volunteers from the SSO book and music sale presented Mark Turner with a cheque from this year’s sale!

The concert began with a short fanfare of a piece: Elan: Sesquie for Canada’s 150th by Derek Charke – a broad triumphant sweep that was over too soon and heralded in the Canadian Oath of Citizenship Ceremony – very powerful words spoken about being Canadian and becoming Canadian preceded this and the audience was invited to take part reaffirming their Canadian citizenship as well. 20 new Canadians were sworn in during this ceremony followed by the communal singing of O Canada with orchestral accompaniment – a truly proud moment. 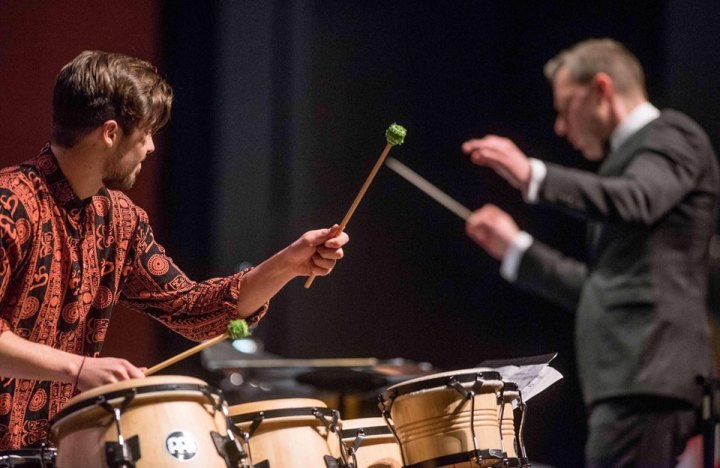 The Shaman, Concerto for Percussion and Orchestra by Vincent Ho – featuring the Barefoot Shaman himself: percussionist Bryan Allen … inviting, evocative, compelling, leaving no recourse but to come along for the ride. The titles of each section of this work describe perfectly what is happening musically in each section.

I.        Ritual  – the title says it all – and, you really had to be there to experience this music – primal, primeval, all encompassing.

III.       Fire Dance – a whirling dervish style opening in the strings, brass, woodwinds, and of course percussion – driving forward throughout this movement.

After intermission, Raven Steals the Light by John Oliver was performed – presented by SSO and narrator, Carol Greyeyes. Storytelling in words and music invited us into a magical world creating images with words and music – a fascinating story that brought light back to the world of darkness.

Four Seasons of the Canadian Flag by John Burge closed the program. Beginning with Summer, each season was heralded in evocatively – sweeping Romantic melodies for Summer, cold high notes for Fall, deep rumbles for Winter (that included nostalgic bits of heart wrenching, longing melodies), and tremolos and trills in the strings to herald in Spring! My favourite moment in this work involved the perfect unison of tambourine (Bryan Allen) and snare drum (Brad Litster I believe) – so clear, clean, precise, locked in – this reflects the epitome of technical artistry.

Thank you, Bryan Allen for your intense, focused, inside-the-music performance – you are an inspirational musician and performer. Thank you, Carol Greyeyes for your beautiful and entertaining narration. Thank you to every member of the SSO – what a fantastic concert and superior season – looking forward to what next season brings!! Thank you Eric Paetkau for your artistic brilliance and inspiring leadership – thus far, you have created beautiful, straightforward, evocative, and compelling clarity with our orchestra and I can see there is more to come – looking forward to every moment. Thank you of course to Mark Turner for all his inspirations and enthusiasm – you definitely deserve your holiday, sir!!! Thank you to everyone else involved in making these concerts successful!! Here’s to more SSO success – check out their Share in the Future campaign.

Thanks to my Kevi B for attending the concert with me and for helping me to refocus and come down from the excitement of the concert experience enough to relive it and reflect on the experience.

What a way to wrap up a season!!! Bravo Bryan, Bravo SSO, Bravo Mark, Bravo tutti & merci beaucoup beaucoup – looking forward to the treasures of next season!

Anna Marie Bekolay has her Bachelor of Music in Music Education, Orff Level 1, a gold medal ARCT in Voice Performance, and grade 10 Violin RCM. Anna has performed as a soloist and in a variety of ensembles over the years, including Saskatoon Opera Chorus, National Youth Choir of Canada, Collegium Musicum, Voci Strane, and the drowned. Ms Bekolay is continually advancing her musicality through attending and performing in concerts. Her current projects include: Back of the Bus, Troubadours du Bois, The Whiskey Jerks, Mac Talla Quartet, The Stephanies, a recording project of classical vocal pieces that will be released soon and dedicated to her late father, and a variety of freelance collaborations that come up here and there – including a show with Flamenco Borealis in June at The Bassment.

In addition to rehearsing, performing, and recording, Anna is an adjudicator for the Saskatchewan Music Festival Association and runs Anna Bekolay’s Studio – a very busy Music Studio at her home teaching Voice, Violin, Recorder, and Fiddle. Anna makes her home in Saskatoon, Saskatchewan.